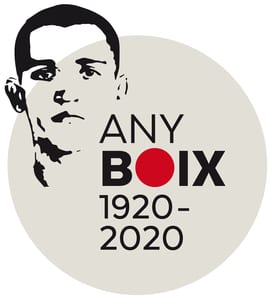 On May the 8th, 2018, Fotoconnexió inaugurated the exhibition The First Shots of Francesc Boix in Les Cotxeres de Sants. I decided to go, and I also took a precious collection, Paco’s family photographs (both the ones he leaves, the ones he took or the ones he sent).

Paco was a friend of the family; he lived at 17 Margarit street, in Barcelona’s Poble Sec, and my grandparents and father lived at 15 the same street. Paco spent more time at grandma Carmen’s haberdashery than at his house. I met him in the summer of 1945 in Montpellier, when he was 25 years old (he had left Mathausen in May) and I was 4 years old. He came to see the Andreu family (his family in exile), the only family he would meet again, since he never saw his parents and sisters again. For me, at that time only Paco was an older person who did not behave like an adult: he made me serve as an excuse for both of us to fill ourselves with ice cream; he left me his camera to play; and he encouraged me to do mischief when we went to the beach, the summers of 1945 to 1947. He was the best playmate I had; first only with me and later we incorporated my sister … the dream of a child.

After the summer of 1947 I never saw him again, but he has always been part of my family imagination. First grandmother Carmen, then mother and now me, we have all been sure that we must preserve the facts and keep them documented for future generations: that is why we have kept Paco’s photographs.

The historical dimension of the character has been contributed to me by various external factors:

However, it must be said that it was as a result of the Fotoconnexió exhibition in the Cotxeres, on the 73rd anniversary of the liberation of the Nazi camps, that I decided to actively join the Boix project, since it is necessary to preserve the historical memory.

We cannot let the new generations ignore the tragedy of the deported anti-fascist republicans. Paco and his companions fought hard to get the graphic documents of barbarism out of the fields and it is our job not to forget this.