Following an intervention initiated by Fotoconnexió, in March 2013 the Dignity Commission acquired 1,368 negatives of unknown authorship at an auction, some of which contained images of the Spanish Civil War. For this, a public appeal was made to collect 7,500 euros, a milestone that was achieved with the contributions of about fifty people, the Ara Llibres publishing house and the Sapiens magazine. 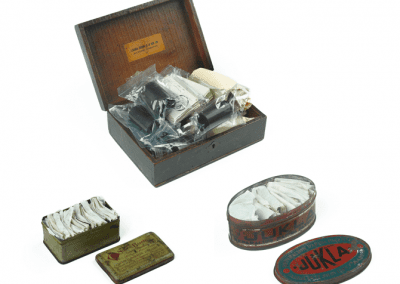 The negatives acquired in 2013 as they were acquired, in two tin boxes and a wooden one. 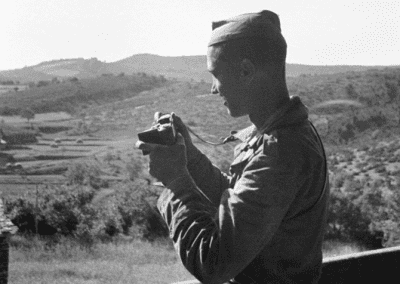 The negatives are made of cellulose nitrate and in two different formats (35mm and 127) with images from the years of the Second Republic and the Spanish Civil War. They came packed in a wooden box, two brass ones, and some plastic filing cabinets. The material was in a good state of conservation and some of the negatives were accompanied by handwritten annotations on paper wrappers. 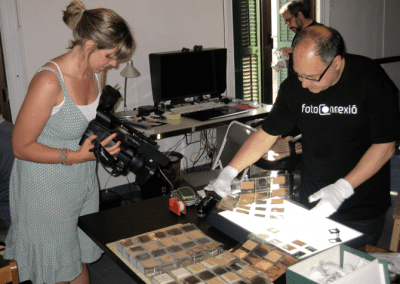 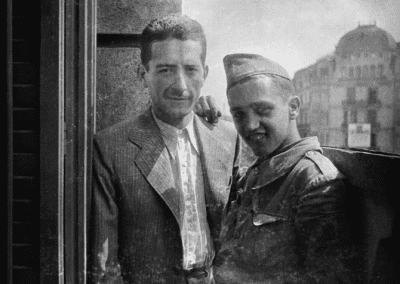 A working group from Fotoconnexió did the research, digitization and cataloging of the photographic collection. The joint work with the Dignity Commission allowed the authorship of the photographs to be revealed. Those of the Spanish Civil War are by the photographer Francesc Boix (Barcelona, 31-08-1920; Paris 4-7-1951) and were made throughout 1938, first on the Aragon front -in, for example, Martín del Río, Pancrudo and Fuentes de Ebro- and then in front of the Segre river, in the area comprised by the towns of Vilanova de la Barca, Linyola, Camarasa, Baldomar, Montgai, Vilanova de Meià and the Montsec mountain range, an area where still nowadays you can find vestiges of the war. 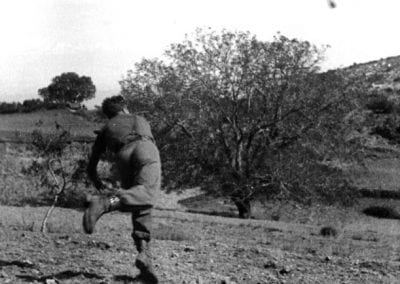 Commander Valverde teaches the draftees how to throw a hand grenade. 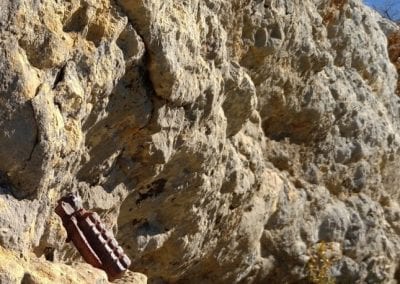 At Montsec there is still material from the time when Boix was, such as this hand grenade located in March 2019 between Paso de las Yeguas and Puig de la via cattle in Montsec de Meià. (Photo: Xavier Fontanals Palacios).

The rest of the photographs, approximately half of the negatives acquired in 2013, were taken between 1930 and 1936 and are by an unknown author, having been discarded by handwriting tests that they were from Boix’s father. The referred images contain female portraits, views of Sitges, Montjuïc, the outskirts of Barcelona, some historical events (such as the 1931 and 1932 elections) and the destruction of October 6, 1934. 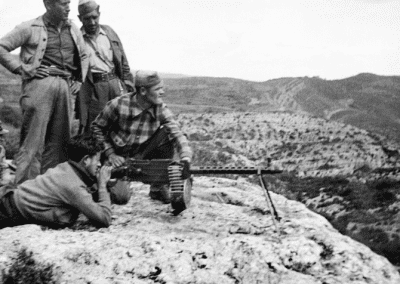 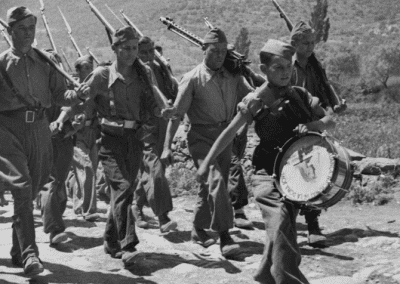 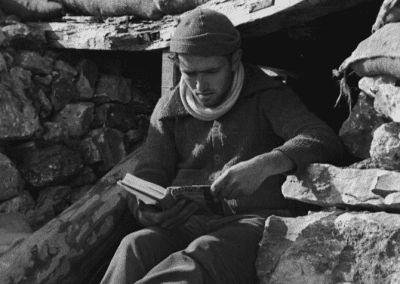 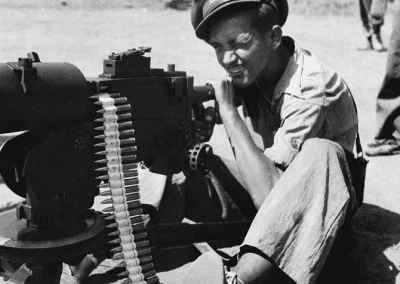 Francesc Boix with a machine gun in 1938

Francesc Boix’s political commitment to the Unified Socialist Youth of Catalonia led him to the head of Aragon and Segre at the age of 17, volunteering in February 1938 in the People’s Army of the Republic. There he basically portrayed the daily life of the soldiers and, on some occasions, the front line. After the Civil War Boix went into exile in France where he was interned in various refugee camps. Later he joined the work brigades of the French army and during the World War (1939-1945) he was captured by the German army. In 1941 he entered the Mauthausen concentration camp, where he worked in the photographic service. The photos he hid with other comrades and his testimony at the Nuremberg and Dachau trials in 1946, contributed to the conviction of several Nazi leaders. With the recovery of the negatives of the Civil War by Francesc Boix, the photographic legacy of a young communist militant from Poble Sec in Barcelona is completed, who has gone down in history as one of the most prominent photographers in the country. Since September 14, 2016, the collection has been kept in the National Archive of Catalonia and the images corresponding to the Civil War are available to researchers and the general public through online consultation. 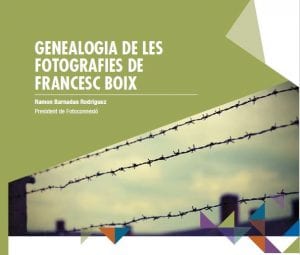 Article published in the Legajo magazine of the Association of Archivists-Document Managers of Catalonia, to whom we thank the permission to disseminate

In the National Archive of Catalonia 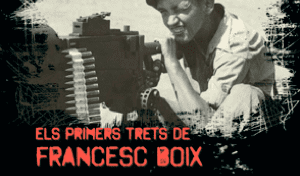 The Instituto de Estudios Ilerdencs inaugurated the exhibition The First Shots of Francesc Boix on December 15th, 2016, with a display of 130 photographs of life in front of Republican combatants and civilians. This exhibition, curated by Ramon Barnadas and Ricard Marco from Fotoconnexió, will roam around different towns over the next few years and is accompanied by the edition of a book in Catalan and Spanish by the Ara Llibres publishing house. More information about the book.

The two wars of photographer Boix

The son in the front

A selection of portraits of Republican soldiers on the Aragon and Segre fronts made by Francesc Boix during the Spanish Civil War in 1938. The photographer voluntarily joined the 30th Division of the People’s Army of the Republic at the age of 17. The exhibition is accompanied by texts and poems by Agustí Bartra and Montserrat Roig.

After the Civil War, Francesc Boix (Barcelona, ​​1920-Paris, 1951) went into exile in France where he was interned in the refugee camps of Vernet d’Ariège and Septfonds. He later joined the 28th Foreign Workers Company with other Republican ex-combatants. Soon after, he was captured by the German army and in January 1941 he entered the Mauthausen concentration camp. Boix worked at the camp’s photographic identification service and, together with other prisoners, hid photographs taken by the “SS”. These images were presented as evidence during his testimony at the Nuremberg and Dachau trials in 1946 to convict various Nazi leaders.

The photographs of the Boix Civil War were recovered by the Dignity Commission and Photo-annexed in 2013 and, subsequently, digitized and documented until they were delivered to the National Archive of Catalonia in September 2016.

The exhibition The Son on the Front has been produced and provided by the Instituto de Estudios Ilerdencs and organized by Fotoconnexió.

The year 2020 marks the centenary of the birth of Francesc Boix, a photographer from the Poble Sec neighborhood. His figure stands out for being a witness to the horrors of the Mauthausen concentration camp. Francesc Boix was assigned to the photography department of the field and risk his life, together with other colleagues, to hide the photographic negatives that reflected the reality of the field. Francesc Boix’s statement at the Nuremberg Trials was decisive in incriminating senior Nazi leaders. Like Francesc Boix, thousands of Spanish Republicans were deported to the Mauthausen concentration camp and other camps.

Among the activities of this year Boix, a virtual exhibition has also been prepared with the personal photos of Francesc Boix, from the Andreu family collection, images digitized by Ricard Marco and that have been loaned by August Andreu in Fotoconnexió: 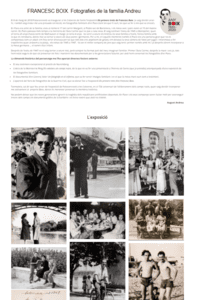 Barcelona pays tribute to Francesc Boix, known as the Mauthausen photographer because he managed to remove from the concentration camp the images that served as accusation evidence against the Nazi commanders in the Nuremberg trial. On the centenary of his birth, the Boix Year (1920-2020) has served to publicize the rest of the aspects of the life and work of the photographer from Poble Sec.