Papers Fotogràfics is a magazine edited by Fotoconnexió whose objective is to disseminate monographic works on the history of photography throughout the world.

The acceptance of the works is preceded by a peer review. The candidate texts must be original, unpublished or have been published in out-of-print volumes which are not currently accessible. Previous works that have been updated with sufficient depth can also be considered for publication.

Papers Fotogràfics publishes under the Creative Commons BY-NC-SA license, and the permissions for the use of the images contained in the monographs are the responsibility of their authors.

Proposals should be sent to secretaria@fotoconnexio.org addressed to the editorial board of Papers Fotogràfics. 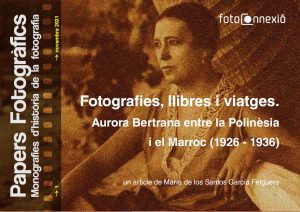 Aurora Bertrana between Polynesia and Morocco (1926-1936)

A traveler, writer, cellist, politician, freelancer, Freemason and feminist, Aurora Bertrana illustrated her travel books, articles and novels with photographs. In Polynesian texts she used some made by her husband (Denis Choffat) or bought from professional companies; on the trip to Morocco she brought her own camera, a Kodak that identified her as a journalist (along with the notebook) and that she could not use as much as she would have liked due to multiple difficulties, including approaching to women. In this article we analyze the role of the photographs referred to in the context of the thought, writings and life of the Catalan writer, who from her first articles took them into account as an important part; and the role of the camera itself that functions as a shield in complicated situations. Aurora Bertrana raises issues that remain crucial in today’s photography, such as respect for the other person and even the renunciation of using the camera so as not to break that respect.